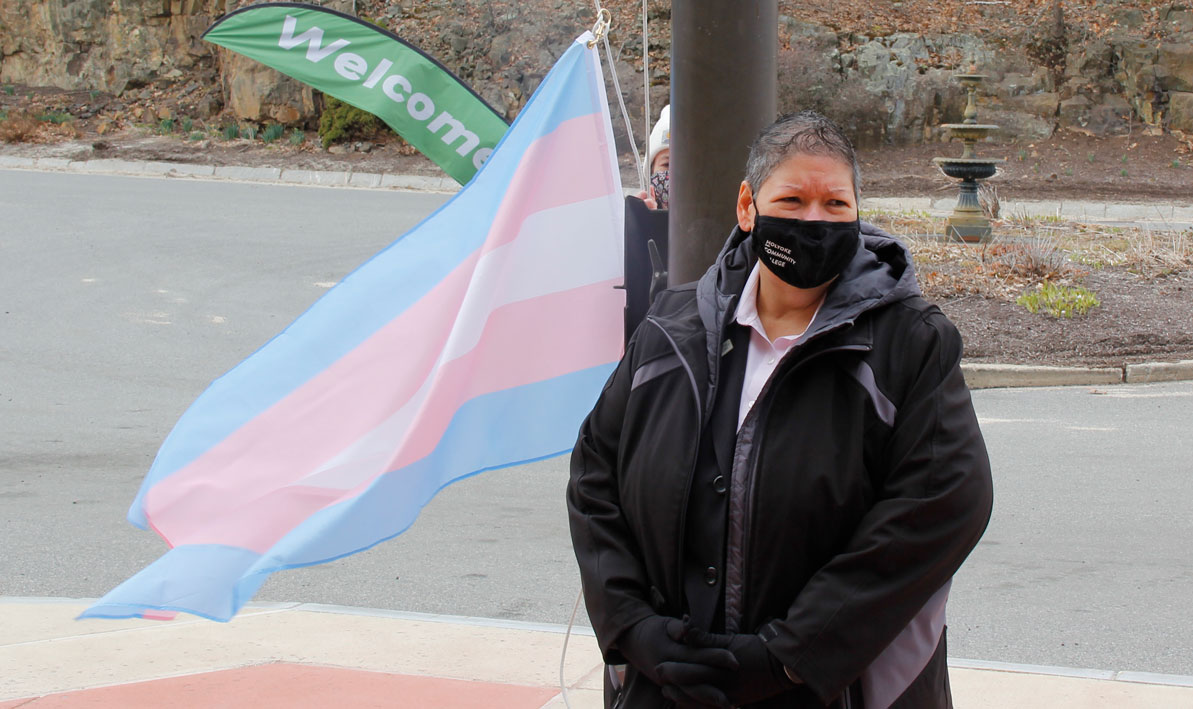 Despite the cold and windy conditions, about two dozen HCC students, faculty and staff turned out to watch President Christina Royal raise the flag.

"We are very excited today to be able to raise the flag in support of transgender individuals and to recognize the day of transgender visibility," Royal said. "At HCC, over the last several years, I've heard from many trans students who wanted us to do better. And a part of that work is really being able to meet students like we do, in all cases, across various identity groups, and to find ways as an institution to support them in the best way possible to ensure their success."

International Transgender Day of Visibility is a day dedicated to celebrating the accomplishments of transgender and gender-nonconforming people and raise awareness about transgender issues.

"In terms of the work that we specifically have been doing in this area, our goal is to become a trans-affirming campus," said Royal. "That, point blank, is what we're working towards."

As such, she said, "HCC recognizes students and the names they want to use." The college has also been working to increase the number of gender-neutral bathrooms on campus.

According to a 2021 magazine article in seventeen, Monica Helms, a Navy veteran and transgender woman, created the transgender pride flag in 1999.

"The light blue is the traditional color for baby boys, pink is for girls, and the white in the middle is for those who are transitioning, those who feel they have a neutral gender or no gender, and those who are intersexed," Helms explained.

She designed the flag to look the same from every direction, no matter how it's held.

HCC biology major Avery Maltz (they/them) said that before they enrolled at HCC they didn't feel safe enough to come out for fear of losing their job and housing.

"During my time at HCC, I realized that it would be safe for me to transition and live as who I am," Maltz said to the crowd. "It has not been a perfectly smooth path. But I do see changes being made. I see engagement. And that's really the most important thing is that I continue to see – people engaging with the work. That's how progress happens. I'm just grateful to be graduating from HCC this semester as an out, trans-person who can talk to you all about that and have this flag going up behind me. That's something I never thought would happen."